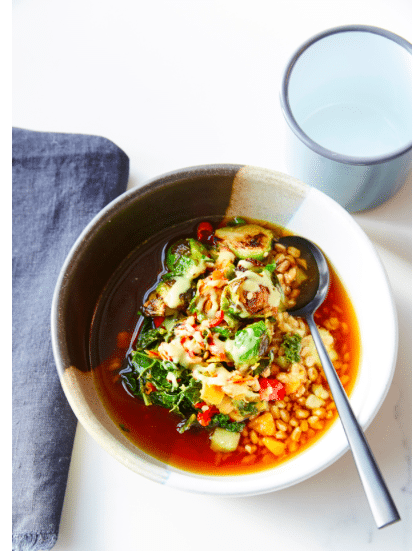 Posted at 03:41h in Case Studies by admin

With snacking on the rise, soup satisfies as a smaller meal that’s both versatile and flavorful

Consumers are eschewing traditional day parts in favor of increased snacking, and restaurant traffic is slowing at lunch and dinner.

Soup is stepping in to fill the gaps. It’s also proving to be a versatile canvas for introducing new flavors to customers, as well as being easier to execute for operators.

More comforting than salad, and easier on operations, soups, stews and chilis are appearing more frequently as main courses on menus — up 3.3 percent over the past four years, according to menu research firm Datassential — while they’re on the decline as appetizers and sides. Salad entrées, by contrast, are down 2.1 percent on menus.

“If you could sell only soup in a retail environment, it’s actually a very easy business. The other stuff is more complicated,” said Andrew Schnipper, who, with his brother Jonathan, founded Hale and Hearty Soups in 1995. They sold the New York City-based chain, which now has 29 locations, in 2006.

But selling only soup is a risky proposition, and soup-centric chains, such as Hale and Hearty and Detroit-based Zoup! typically serve sandwiches and salads as well.

Although soup is becoming more common as a meal, soup sales are still seasonal, especially in warmer climates, and can vary widely by location and even daily weather conditions.

Still, soup can be easy to add as a special on cold days, which is what Atlanta-based Uncle Maddio’s Pizza does. Jenelle Brown, vice president of operations and training for the 42-unit chain, said that on cold days franchisees can make a tomato, basil and goat cheese soup by adding cream, goat cheese and balsamic reduction to the chain’s tomato sauce, and topping it with basil.

Soup can also be a robust addition to a fast-casual restaurant’s assembly line. Matt Weingarten, culinary director of 14-unit Dig Inn, based in New York City, recently added a line of vegan broths, which add variety to the menu and underscore the chain’s sustainable ethos by using vegetable scraps and leftovers from its fresh-juice program.

Weingarten adds kombu and an array of aromatics — star anise, dried shiitake mushrooms, coriander, black pepper, thyme, rosemary, onions and parsley — to the roasted scraps, “so it’s a very rich, deep, nutrient-rich broth that forms the base of our soups,” he said. “It’s very satisfying straight up.”

Dig Inn even sells the broth to go in paper coffee cups, for $5, much like two-unit Brodo, also in New York City, and one of the originators of the bone broth trend, does with its broths, starting at $9 each.