24 Big Brand Anniversaries From 100 years old to five, these limited-service restaurants are celebrating milestones in 2016. 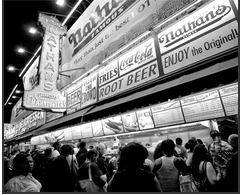 15 Sep 24 Big Brand Anniversaries From 100 years old to five, these limited-service restaurants are celebrating milestones in 2016.

Posted at 18:25h in Case Studies by admin

When it comes to business, Americans tend to fall in love with the new—new companies, new products, new deals. But there’s value in the old, too, and across the limited-service industry, major brands like to remind customers of major milestones as way of communicating trust, heritage, and expertise.

From old brands to new, these are the brands celebrating significant anniversaries in 2016.

Nathan’s Famous
(100)
Think of Nathan’s Famous today and you might think of two things: the hot dogs widely available in supermarkets and restaurants all across the U.S., and the July 4 Hot Dog Eating Contest that draws thousands of spectators every year and countless headlines across consumer media.

But this year, Nathan’s wants consumers to know something far more important than how many hot dogs Joey Chestnut ate in 10 minutes to win this year’s competition (70): The brand is now 100 years old, one of the oldest foodservice brands in the U.S.

WHITE CASTLE:  As one of the oldest national quick-service chains, White Castle has built a rabid fan base over the course of nearly a century by sticking to its tried-and-true sliders. The brand launched in 1921 in Wichita, Kansas, when founder Billy Ingram and local cook Walt Anderson opened the first location, which sold 5-cent sliders, Coca-Cola, coffee, and apple pie.

Now based in Columbus, Ohio, but still owned by the Ingram family, White Castle kicked off a year-long celebration of the anniversary in February when it offered its loyal fans—dubbed the “Cravers”—bundled “Share a Meals” for $9.95.

Fast forward 45 years, and Howard Schultz—who joined Starbucks in 1982 as its marketing chief and was inspired by Italian coffee bars—has turned the coffee brand into just that. Starbucks is now the No. 2 limited-service restaurant in the U.S., growing on the strength of its beverage innovation, mobile ordering and loyalty platforms, and commitment to its employees. Just this year, the company upped that team-member commitment, pledging to increase pay, improve benefits, and evolve the dress code across the country.

POTBELLY: Fast-casual sandwich chain Potbelly first opened in the ’70s, but Potbelly Sandwich Shop as we know it launched in 1996 when Bryant Keil purchased the Chicago-based restaurant. Keil grew the company to more than 400 locations before exiting the business in 2015, two years after Potbelly went public.

PIE FIVE: The fast-casual pizza industry has exploded in the last three years, with dozens of brands competing for a slice of the market. But Pie Five lays claim to being one of the first to market, founded by casual chain Pizza Inn in 2011. The concept celebrated the anniversary by donating $1 for every pizza sold June 20–24 to Children’s Health, a pediatric health system in Texas.

for the complete article visit: https://www.qsrmagazine.com/reports/24-big-brand-anniversaries